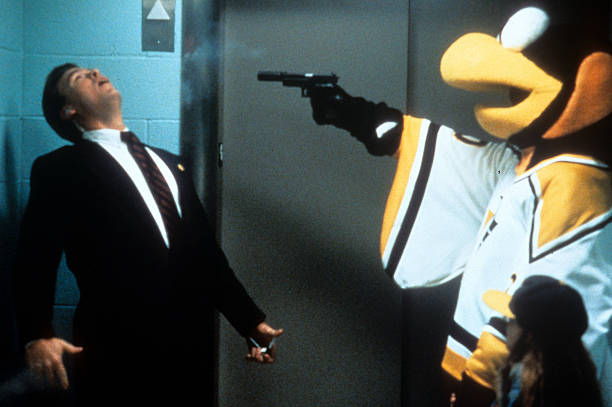 A man is shot by the mascot in a scene from the film 'Sudden Death', 1995. (Photo by Universal/Getty Images)

Svdden Death majorly produces in Dubstep and regards it as more  technical than other sets of genre. Vyod is his most successful work with heavier and darker style.Howland clarified that “[Voyd is] more of a continuation of like a darker and heavier style of my music. With Svdden Death I want to branch out and do more melodic stuff. I still think Voyd is the kind of music I get into when I’m mad or really stressed.”

These days Svdden Death is preparing for  the biggest festival lineups like Ultra Music Festival, BUKU, EDC, Lost Lands, and Forbidden Kingdom. In the past  he has collaborated with many artists such as AFKY akz Ubur Somnium Sound Marshmello etc. He can play different instruments such as guitar, bass and piano; he has been in Indie, metal and jazz bands. This could tell he is an experimental and experienced artist.

Danny Howland, better known as SVDDEN DEATH, will be performing at ULTRA this year as the VOYD.  He has different style which could from different kinds of experience which he shared.

“Definitely a lot of things. I listen to a lot of music and ingest a lot of art because it’s very motivating for me. Eventually I want to become a visual artist. Like doing random stuff like 3D stuff or illustration and painting. For VOYD I took a lot of inspiration from Berserk. Even before I read through all the manga. As soon as I watched the first anime I was really visually inspired by the dark themes, the drama and the demons. That was really fundamental to help build a visual template for the universe that I am creating separately for VOYD. Other than that I would say dungeons and dragons. I was always obsessed with that as a kid.”